Treatment of torticollis in children

Torticollis – it is underdevelopment of muscle tissue and spinal motion segments of the cervical spine, i.e. this is physiological deviation from the norm.

One of the causes of torticollis can be forced position of the head of the child during pregnancy, then his neck twine with umbilical cord. Mother’s health also can be a cause: chronic diseases of the internal organs, trauma during childbirth and post-natal injuries, as a result there are functional blocking of the cervical vertebrae (offset relative to each other). We can frequently see blocking in 1-2 (as a result of birth injury) or in 6 -7 (the first month of life) vertebrae. In later life torticollis can because of injures inflammatory processes in the muscle tissues, etc.

Because of subluxation of the first cervical vertebra (atlanta), blood circulation in the brain is broken, as a result, the body begins to adapt to this, as a result there is forced curvature of the cervical spine, that’s why turning of the head to the side is limited. In the area of ​​the vertebral subluxation and blocking areas of growth of the vertebral body are partially closed. There is hypoplasia or abnormality of the individual vertebrae. Atlas (first cervical vertebra) is formed to 6-7 months of age.  It has form of «Lodge” (as normal), on which there is a skull, so unformed it leads to chronic hypoxia.  The load on the retention skull is distributed over 2 and third cervical vertebrae which is why they are slightly kiphosised (bulging of the dorsal). In normal conditions all the vertebrae in the cervical spine should be in lordosis (bend forward) thereby it is provide normal blood supply, innervation and work of all nervous systems. That is why, it is very necessary especially in childhood as early as possible to correct even minor torticollis.

Even during the minor torticollis, as a result of compensatory reactions, self-regulation of the organism, eventually the spine takes the form of «spiral», whereby developing curvature of the spine (scoliosis).

In every age have different symptoms. Every day old problems add new, and it is like a snowballing. But attentive parents can diagnose it by themselves. There are certain symptoms.

If you think, that your child differently turning his head in both sides, do not pull on any day, it is necessary to examined immediately.

Treatment of torticollis in children 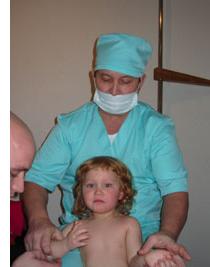 There is a misconception, that torticollis can be eliminate by massage, special lays of the child, “Chance” collars wearing.  In the same time, we gratuitouslylostthe most precious time, when all in the child’s organism are formed, including vertebrae, intervertebral discs and the entire musculoskeletal system.

The essence of the Ignatyev’s method is in the special “soft” techniques, with the help of the hands to eliminate blocking in the cervical spine.

There is especially individual approach to the treatment. One should to have 1-2 sessions every other day, another 2-3 session with one week intervals and then 1 session in a month later. In total there are 5-6 sessions for a year. In the future it is recommended every six month or year come to the doctor for prevention of scoliosis.