-Complications and consequences of scoliosis

Scoliosis – (from Greek “curvature”, “deviation from the norm”, “spinal curvature) – it is a a serious disease of the musculoskeletal system, that known from ancient times. 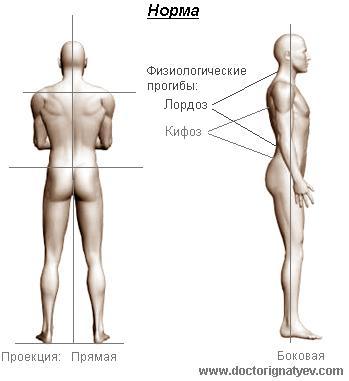 Human’s spine normally have 4 physical curvature — bend forward (lordosis) in the cervical and lumbar parts, bend back (kyphosis) in the thoracic and sacral parts. All another curvatures, asymmetry or offset from the central axis of the spine are scoliosis. 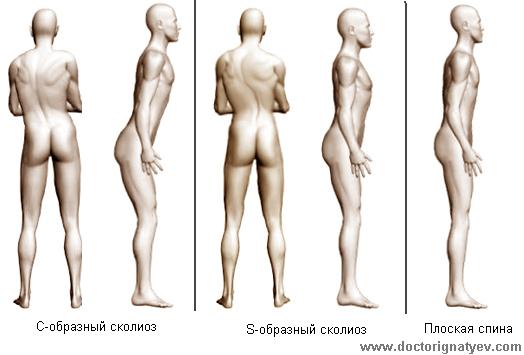 There are a lot of combine scoliosis, including deformities of the chest, keeled, funnel-shaped, convex etc. ) and costal arches. There are 5 main groups of origins of scoliosis:

myopathic origin – as a result of hypoplasia of the musculo-ligamentous system, for  example,  because of rickets;
neurogenic origin – for example, as result of sciatica;
scoliosis on the basis of developmental abnormalities of vertebrae and ribs;
scoliosis caused by diseases of the chest;
idiopathic scoliosis – if doctors can’t determine the reason of spinal deformities; 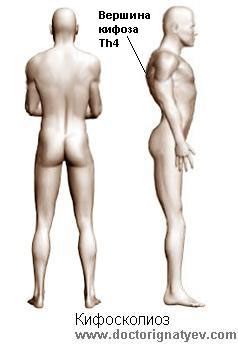 Scoliosis can began in babyhood, as a result of underdevelopment of the joints in children (dysplasia) and torticollis, continue to form in school (also add wrong physical activities), developing in the age of 13 – 15 years old, (functional blocking is not remove, and child sharply stretched in height)and finally redouble in old age (wrong mode of work and rest, absence of physical activities). Scoliosis can appeared as a result of traumas and physical changes (bent, old man’s back, Bechterew disease)

Symptoms and signs of scoliosis in adults and children

It is not hard to determine scoliosis. For the first, ask child to stand back to you, sideways or facing to you. He must to relax, because he should to get his usual pose of posture.
Look at the main symptoms of scoliosis:

In a standing position:

In position lying on the stomach (lie down as «on a stretched string», hands at his sides, head on the chin):

In the supine position:

The diagnosis of scoliosis is not hard for an experienced specialist, including clinical and X-ray examination.

There are a lot of causes of scoliosis disease. Let’s review some of them.
If there is a functional block of spinal motion segment, in childhood growth of the vertebral body disturbed, as a result there is hypoplasia of the intervertebral disc (see scheme). As compensation, there is wedge-shaped vertebra which leads to a deviation from the normal axis of the spine. Wherein there is limitation of motion in the spine, muscle ligaments surrounding the spinal motion segment spasm, metabolism and circulation of a blood is broken, edema formation and subsequently acute pain happens. 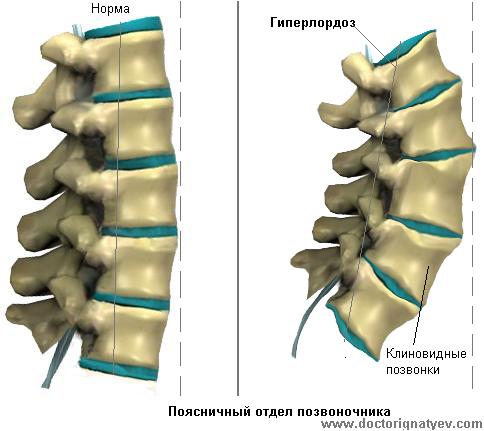 One of the symptoms of scoliosis is wedge-shaped vertebrae.
Let’s consider, for clarity, work of one element of the cycle, bicycle chain, that consisting from a series of interconnected links. How long will be able to move the bike if at least one of the units will deform or bent? So like this, human’s spine built from many connected in vertebral segments and intervertebral discs who has a role of shock absorbers. And if one of the links is deformed — the curvature formed; with it there is asymmetry of muscle tissue too. Frequently it leads to disproportionate changes of sizes of muscle tissue in different parts of body and internal paired organs.

One of the causes of scoliosis is children’s torticollis
It is leads to underdevelopment and the lower cervical vertebrae. As a result of constraint poses of a child, compensatory reactions and self-regulation of a body, spine takes a form of barely perceptible spiral. Because of it hereinafter will be not only hypoplasia of the intervertebral discs, vertebrae, but also deformation of costal arches. For example, rib hump on his back in the right thoracic part, in front will be on the left side as convexity of thorax, and in the lower-thoracic and lumbar parts muscle spindle is formed at the left. That is why costal arches and spine looks like a “propeller”. According to degree of scoliosis, age such situation become not for a better.  (Read about Torticollis)

Another cause it is wrong method of treatment of hips joints dysplasia and oblique pelvis.

Complications and consequences of scoliosis

Sooner or later abnormalities in posture will lead to number of associated diseases: osteoch ondrosis , diseases of the gastrointestinal tract, cardiovascular and respiratory systems, genital system , vasoneurosis, cardiopsychoneurosis, vertebrobasilar insufficiency and arthrosis of joints , metabolic disorders, etc. Frequently in childhood doctors diagnosed a whole bunch of diseases to kinds with scoliosis posture: bend of the gallbladder, biliary dyskinesia, cholecystitis, and pancreatitis. During the scoliosis disease immune system is weakened, that’s why organism is susceptible by various viral infections, goiter, and all kinds of allergic manifestations and other.
In addition to impaired posture and increased load on the musculoskeletal system, girls to the puberty period frequently have polycystic and / or ovarian adnexitises. It is also can be hormonal disorders, menstrual disruptions, severe headaches, aching drawing pain in the lower back, lower abdomen. Hereinafter, when they will be prepared to become mothers, it will be hard to become pregnant if they have wry pelvis, they would face a threat to pregnancy (because of the constant pain in the lower back and abdomen), wrong location of the fetus, uterine inertia, increased pain in childbirth and a lot of other problems.

Remember! Children and adults have additional physical loads to the vital organs (heart and lungs).  Excessive physical activity can leads to very terrible consequences. Recently there are more fatal outcomes at the physical culture classes and games.
It is necessary before the beginning of physical exercises make posture correction, than dispensed by prescription made physical exercises. And only than muscle asymmetry gone and for this purpose you need not less than 1 year, you can engage physical exercises and some kinds of sports. Especially useful for posture in childhood are choreography classes, artistic and sport gymnastic. Than teenager is formed, you can choose any kind of sport as you wish and taking into account the physical possibilities

It is necessary to treat scoliosis in any age, regardless on its degree. If you began your treatment early, you will have better result. The best way it is to treat from the birth, so nobody will talk about scoliotic posture.

Wrong treatment of scoliosis
1. It is a misconception than massage can eliminate scoliosis. Massage is good for healthy people, for example, for athletes before its trainings. Unfortunately, it is contraindicated for people who have scoliosis and arising as a result of his neuro-radicular pain syndrome.

2. Using of orthopedic appliances (all kinds of corsets, gypsum and etc) shows their ineffectiveness and has a lot of inconvenience of its application. During the fixation of the spine corset we made mechanical alignment of the vertebrae relative to the line, but offset and camber costal arches become more aggravated and symptoms of scoliosis stay unchanged.  That’s why own muscular system is weakening, muscles do not keep the spine and scoliosis; the disease progresses.This is because of choice do not tackle the root causes leading to it, and treat consequences compensatory reactions.

3. Also ineffective is physiotherapy. Because of child’s incorrect posture work specific muscle groups this in its turn leads to asymmetries in body. If, for example, child with the lateral scoliosis load by exercises, it will have negative influence on his health. Swimming, which for decades prescribed orthopedic, will develop lateral scoliosis, because one arm he will row more than by another hand. That’s why «Count» between the shoulder blades does not make it get symmetrical. Run increasing dynamic loads on the spine that leads to developing wedge-shaped vertebrae and deterioration of the intervertebral discs and joints of the feet. On the over hand, I make you happy, walking and long distanced never hurt anyone in any age. Movement it is our life.

4. Muscle toning and electrophoresis are ineffective.

MANUAL THERAPY from the specialist

Manual therapy shows the best results in the treatment and prophylaxis of scoliosis in early stages (I –II). With its help it is possible to stop progressing; reduce pain; restore lost mobility; and also at the early stages significantly reduce the abnormal curvature of the spine. 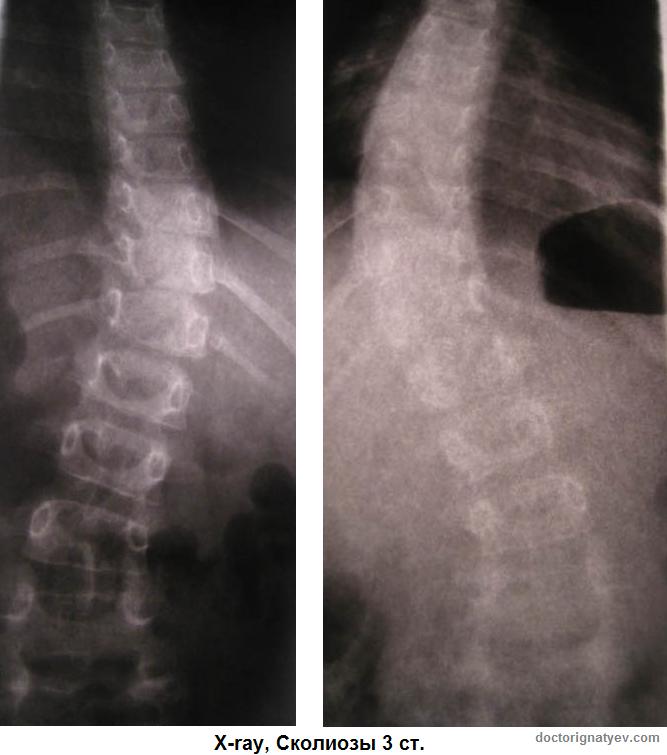 If there is a diagnose scoliosis of III – IV degree and child is more than 15-16 years old, treatment make with the purpose of pain relief and prevention of osteochondrosis. Such teenager has individual physical features that are normal for him, so any wrong intervention and changing his physiology sooner or later can leads to disability.
People abroad talk about such people as: unusual, unique people.

Treatment of scoliosis in children and teenagers

At the primary school possibility of changing child’s posture is 90%. As practice shows, it is enough to pass course of treatment for such child and correct the spine, pelvis, extremity. So goodbye scoliosis and flatfoot!

At the secondary school efficiency of scoliosis treatment is 50%, and it is depends on sex of the child. Girls are practically formed to the puberty period, and it is hand to change something in their posture.  Boys can grow up later for 2-3 years, than girls. In this age period it is necessary to stop progressing of scoliosis and make prophylaxis of osteochondrosis. Unfortunately, recently scientists have found that it can be diagnosed at very young age.

At the high school, skeleton practically formed. In this age, posture correction is especially important, because scoliosis disease includes concomitant diseases.  The seriousness of such breaches will leads to irreversible consequences. Girls can have disruptions in menstrual cycle that eventually can lead to polycystic ovaries or adneksita. Boys can have original problems with prostate, diffidence…

We are not talking about treatment of scoliosis in this age, but if we eliminate misalignment of the pelvis, considerably changing posture. And it is results too!
Biomechanical loads on the spine will distribute more evenly, resistance to wear and tear of intervertebral disc increased.

What is the course of treatment of scoliosis in Kiev?

For treating of  children’s scoliosis I recommending having 3 sessions every other day, than for a month do individual physical exercises,  and a month later have one more session. Hereinafter, if it will be necessary, I recommend have one session semiannually. Such treatment is not harm and is not threatened by instability, in the same time it is we can constantly control and correct posture.
If regulate biomechanics of child from the birth; watching his normal physiological development; timely do correction; eliminate functional blocking; loading properly by physical exercises sometimes – at least once a year; carry out routine examination and correction of an experienced manual  therapist we can grow up healthy generation, who  don’t any orthopedic appliances in future.